The Committee is responsible for the list of Dutch names of mushrooms and ensures that this remains up-to-date. The committee also evaluates proposals for Dutch names of fungi new for the Netherlands and Flanders. At the moment the committee consists of Thom Kuyper (interim chairman), Anneke van de Putte, Roosmarijn Steeman, Jorinde Nuytinck and Bernhard de Vries.

The NMV scientific committee organises meetings with a scientific character such as the flora day, study days concerning specific taxonomic groups and courses for both beginners and advanced mycologists such as, for example, microscopy or determination courses.

The Committee for Mushrooms and Nature Conservation takes care of the mycological contribution to the conservation of nature reserves of all types. It advises estate managers (which may be large organisations such as the National Trust and the State Forestry Commission, but also private landowners or municipal park services) concerning mushroom-friendly control measures, facilitates public responses to environmental impact assessments (MER’s) and coordinates specific inventories of sites for which management measures need to be drawn up at short notice. More information can be obtained from the CPN secretary. 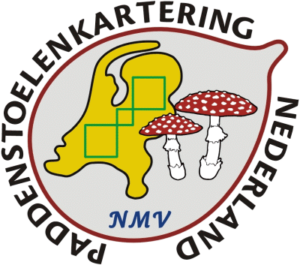 The mushroom mapping project was started in 1980 by Eef Arnolds. Since then it has been run by the Working Group Mushroom Mapping Netherlands (WPN). In 2016 the name was changed to the Mapping Committee. This committee comes under the responsibility of the NMV. The Mapping Committee, in short the KC, consists of a core group and twelve district coordinators (DC’s) in the provinces. The DC’s collect the observations from their regions and constitute the first point of contact for the observers (“mappers”) in the field. The members of the core group determine the objectives and have some specific tasks, which include producing publications about the mushroom mapping project and management of the database.
Read more about the mapping project...

The Mushroom Monitoring Network is part of the Ecological Monitoring Network (NEM), a nation-wide cooperation between the authorities and a number of private data-managing organisations (PGO’s), in which the numerical developments of all sorts of organisms are registered. The mushroom network is run by the NMV together with the Central Bureau of Statistics.
Read more about the mushroom monitoring network...

This working group was inaugurated on 22 November 1997 and aims to stimulate interest in Aphyllophorales (crust-like, polypores, jelly-like, club-like and hedgehog-like fungi), Ascomycetes and slime molds.
The name Cristella  reminds us of M.A. Donk, who gave this name to the group of fungi how known as Trechispora. The group’s activities have recently included the Cristella weekends in the spring and late autumn and organising the Ascomycetes project and Phragmobasidiomycetes project.
Read more about Cristella...

NMV members are active in a large number of mushroom working groups throughout the country. Besides independent working groups there are many groups active within regional divisions of the KNNV and IVN. These also take many initiatives, such as lectures and excursions  limited to members or open to the public and inventory and microscopy days on which NMV, KNNV and IVN work closely together. Whoever is an active member of a working group can increase their knowledge of the mushrooms in their own surroundings. Find regional working groups with the help of the district map.