The Dutch Mycological Society (NMV) was inaugurated on 17 October 1908 and is one of the oldest nature organisations in the Netherlands. The NMV now has nearly a thousand members who occupy themselves, either as amateurs or professionals, with mycology.

To achieve its objectives the NMV works with a number of committees and workgroups, publishes the society’s periodical 'Coolia' and from time to time other publications (including brochures, folders and posters) and organises and/or coordinates national meetings, excursions (forays), study weeks and courses. 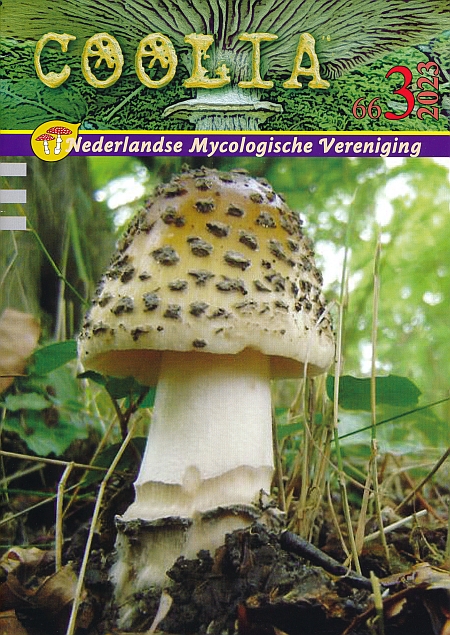 In the winter and spring the NMV organises three national meetings for its members. The dates of these, as far as already known, can be found in the agenda.

The New Year’s meeting traditionally takes place on the second Saturday in January. This is primarily a day when members meet each other and exchange experiences. The programme of talks is varied and aimed at a broad range of listeners. During the (long) midday pause there is time to catch up with each other and mycological literature, microscopy necessities and chemicals are offered for sale.

The annual general meeting is usually held in February. After the meeting it is a tradition to hold a sale of mycological books, which often come from estates. This way, you can extend your library at a reasonable price. In the afternoon, the society’s library can also be visited.

Flora Day. The scientific committee organises a lecture day every year in April with a more scientific character, often around a specific theme such as taxonomy, ecology or nature conservation. This day is traditionally known as the Flora Day because floristic and taxonomic subjects were often the main topics in the past. The lectures are mainly in Dutch but sometimes specialists from abroad are invited and then the working language is English.

The society organises forays from April to December on a weekly basis in different locations throughout the country. These forays have a multiple purpose: the exchange of knowledge and the inventorying of the mycoflora on the spot are the main objectives. You can learn a lot during these excursions from the more experienced mycologists. All species are listed with all relevant information on biotope and substrate. Species which cannot be determined in the field are taken home to be determined microscopically and added to the list later. The lists are finally added to the society’s mapping data project. This way, the data collected during forays form a picture of the distribution and ecology of the mushrooms in the Netherlands and can be applied for instance to studies of nature and landscape conservation and of the influence of changes in the environment and climate. The national forays are shown in the excursion programme on this site.

The NMV organises two study weeks every year, one in the Netherlands and one abroad. These weeks are an excellent opportunity to get to know well the fungi of a particular area. We always arrange group accommodation or a hotel with sufficient space to work in. The “foreign” study week is generally organised in regions where different types of vegetation occur than what we are familiar with in the Netherlands, with the chance of finding species which are rare or absent here. The location of the inland study week is often chosen with reference to the mapping project in areas in which little is known about the occurrence of mushrooms (“white spots”). The study weeks are intended for all members, both beginners and advanced mycologists. They offer an excellent opportunity to share knowledge and experience. During the inland study week extra attention is given to starting mycologists so that they can increase their knowledge of field and form characteristics under expert guidance. The study weeks are announced in Coolia and can also be found in the agenda on this website.

Every year, the NMV organises courses and theme days for beginners and advanced mycologists. A beginners’ course is planned in the autumn of 2020 consisting of five forays and five indoor activities with the aim of learning how to describe and determine mushrooms in a particular area. In the past few years there were theme days for the more advanced on the Mycena, Russula and Cortinarius genera. Microscopy courses are also given. Information about the courses for the current year, as far as available, can be found in the agenda.

Cooperation with other nature organisations

The NMV aims to work together with other nature organisations active in the field of mushrooms. Many NMV members are active in mushroom study groups of the KNNV and the IVN, among others. Various NMV courses including a beginners’ course and a microscopy course are offered in different KNNV regional mushroom study groups. Regional study groups can be found with the help of the district map.

Membership of the NMV costs € 30.-- per year (€ 35,-- per year for postal addresses outside the Netherlands). Members of the same household and junior members € 15.--. This includes the periodical Coolia four time a year, the ability to participate in all the society’s activities and obtain publications by (members of) the society at reduced prices. You can register for membership simply by completing the form on the registration page.